Syros, the capital of Cyclades is located in the very core of the complex, surrounded by the islands of Andros, Tinos, Mykonos, Naxos, and Paros to the east, by the islands of Sifnos, Serifos, Kythnos, and Kea to the west, and by the island of Gyaros to the north. One of the smallest islands of the Cyclades and relatively rural outside of the capital, it nevertheless has the highest population since it’s the legal and administrative center of the entire archipelago.

Hermoupolis, its capital city, being characterized as a town-museum, is the grandest of all Cyclades towns, with an unusual history. Built amphitheatrically on the hills embracing its port, Hermoupolis will instantly take your breath away with its imposing architectural gems, such as the City Hall, the Customs Office, the Apollo Municipal Theater, the neoclassic houses and the beautiful squares. The town was born and created within the blaze of the Greek revolution in 1821 by refugees to save their lives from the Turkish massacre. Its architecture bears witness to the island’s history and, starting in ancient times, continues to the present. It masterfully combines the old with the new, the classical with the modern.

Apart from the capital, the island is famous for the great number of beautiful beaches that delight the sea and sand lovers. Whether looking for organized beaches in Syros like Galissas and Azolimnos, or for private beaches offering isolation, in this island will find them all.

Sýros is also well-known for its gastronomic peculiarities. Local products, such as Halva pie, loukoúmi, “loosa” ham, fennel sausages and the San Mihalis spicy chees will no doubt satisfy even the most demanding taste buds.

Choose among our great variety of luxury villas to rent in Cyclades islands and live an unforgettable experience.

How to get there 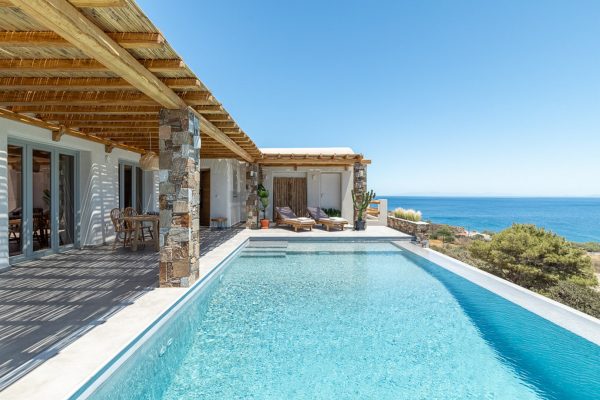 Currently, you don't have any villas saved in favorites.

Villa added to your favorites!